- July 31, 2020
There's been some big news this week about VMware certification involving the release of the new Professional VMware vSphere 7.x exam. So, what does this mean and how does it affect someone wishing to become VCP certified? As there are a number of technology areas you can achieve a VCP certification in, this post is going to look at the 'VCP - Data Center Virtualisation' track.
https://www.vmware.com/education-services/certification/vcp-dcv-7-exam.html
To start with, back in Feb 2019 VMware changed the naming of the VCP certification to now include the year you passed the exam rather than specifying the version of vSphere that you had studied and were examined on. So last year we had the VCP-DCV 2019 and this year will be the VCP-DCV 2020.
If you are already a VCP 2020 then passing this new exam won't gain you anything extra. If, however if you do not currently have a VCP then VMware have dropped the requirement that meant you had to take and pass the Foundations exam. 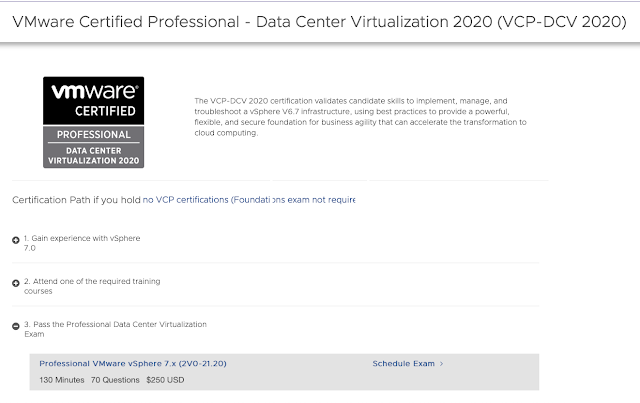 Previously, to get your VCP, you had to do 3 things...
1) Attend a qualifying course (most students I met did the Install, Configure and Manage course)
2) Take and pass the 6.7 Foundations exam 2V0-01.19 ($125)
3) Take and pass the VCP 6.7 exam 2V0-21.19 ($250)
Now if you wish to become a VCP-DCV 2020, you can either take the 6.7 track above OR
1) Attend a qualifying course in version 7
2) Take and pass the VCP 7 exam 2V0-21.20 ($250)
You can see that the second option means one less exam to take and less cost. It is also based on vSphere version 7 rather than 6.7. I would strongly recommend taking a look at the Exam Guide found here...
https://www.vmware.com/content/dam/digitalmarketing/vmware/en/pdf/certification/vmw-2v0-21.20-exam-preparation-guide-v1.pdf
You will also notice that Kubernetes has started to feature within the exam but only on one sub objective (1.3.4).
I have seen some confusion online with suggestions that there is no need to take any qualifying course to get your 'VCP 7 certification'. This is not correct as there is no 'VCP 7' qualification. As mentioned earlier, VCPs are now year based and therefore there is currently only the VCP-DCV 2020 within the data centre track. Whilst you could technically take and pass the Professional VMware vSphere 7.x exam without taking the required training course, you wouldn't gain your VMware certification until you did.
One last point, it is not yet clear if this change was made because there is no version 7 of the Foundations exam at the moment or if there WILL be a version 7 Foundations exam in the future meaning this is just a temporary change.
VCP

Popular posts from this blog

Requirements to become a VCP-DCV 2020 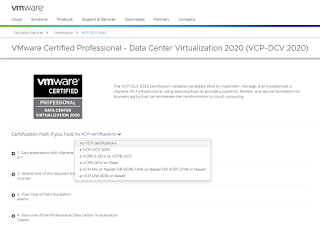 Want to become VMware VCP - DCV certified but not sure of the requirements? This is a question I am asked a lot on the Install Configure Manage course I teach so I thought I'd explain what the requirements and the steps are. There are several levels of certification from VMware, VCA, VCP, VCAP and VCDX and there are different certification tracks that you can study - Data Center, Network, Cloud Management & Automation and Desktop & Mobility.  In this post, I am going write about the VMware Certified Professional - Data Center Virtualisation or VCP-DCV as it's written in short. The first thing that we need to know is that the certification you gain now carries the year you became certified rather than the product version, so if you fulfilled the requirements to be a VCP-DCV this year, you would become a VCP-DCV 2020. The steps to become a VCP-DCV 2020 are listed in the Certification section under Education Services on VMware's website... https://www.vmware.com/educat
Read more

What's New With Each Release Of vSAN